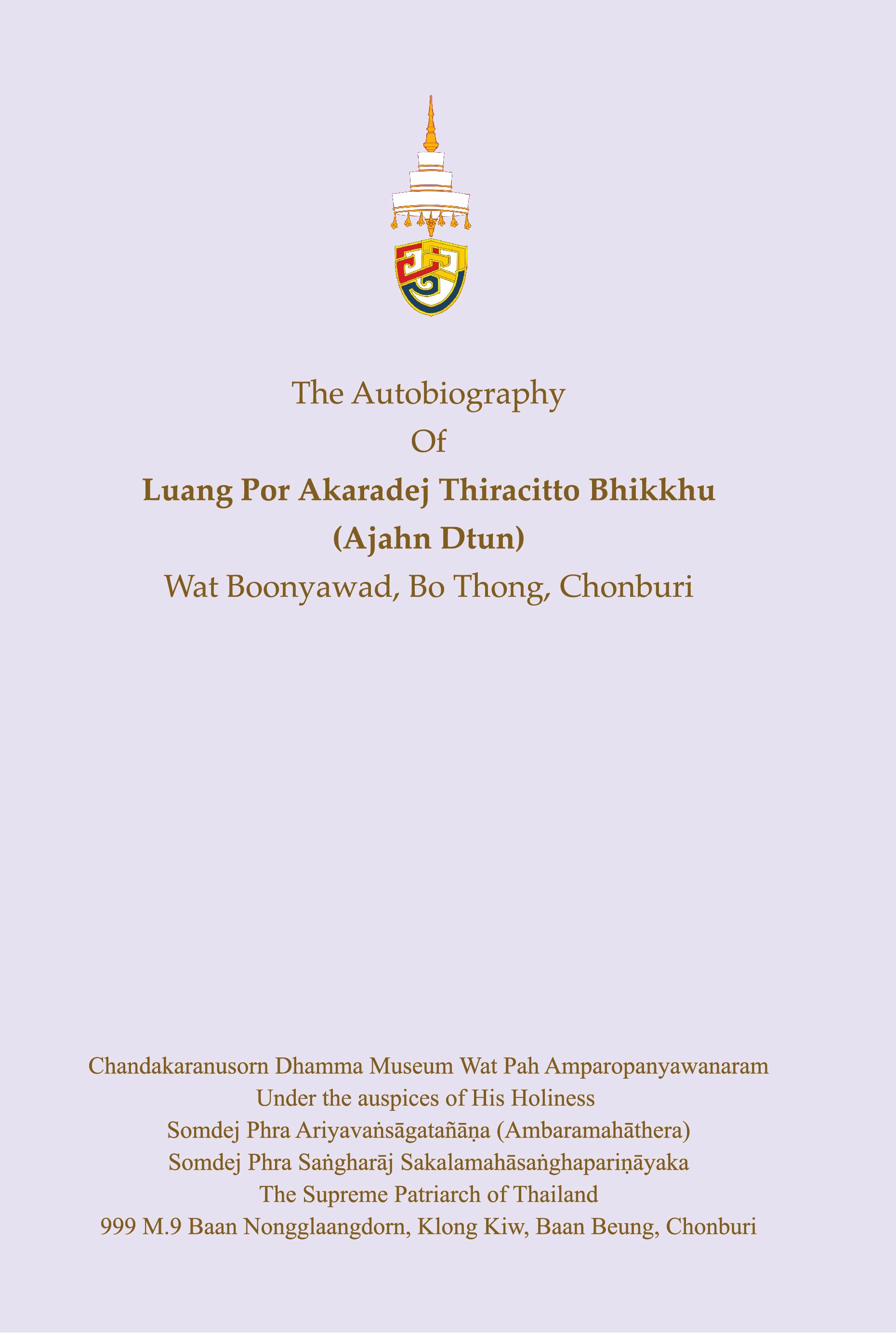 On the evenings of the twenty-second and twenty-third of November, 2017, a large number of monks, novices and laypeople gathered to participate in the official opening of a new monastery built under the auspices of His Holiness Somdej Phra Ariyavaṅsāgatañāṅa, the Supreme Patriarch of Thailand. The monastery is called Wat Pah Amparopanyawanaram (more commonly referred to as Wat Pah Amparo). Also being inaugurated was the Chandakaranusorn Dhamma Museum. His Holiness entrusted Luang Por Tui (Preeda) Chandakaro, who is presently one of the most respected senior elders in the Thai Forest Tradition, to take responsibility for the monastery’s construction.

Luang Por Tui personally selected the biographies of thirty-four monks of the Rattanakosin era from the early 1900s up to the present to be housed in the Dhamma Museum. Sometime in the month of July, 2017, Luang Por Tui had a lay person who was also a disciple of Luang Por Akaradej Thiracitto request his autobiography for inclusion in the museum. Luang Por Akaradej had always felt he would wait until he was at least seventy before writing one. On being requested, he said initially he couldn’t be bothered to write it himself, so he allowed this lay person to draft a brief biography. When it was brought to him for checking, he thought some things they had written weren’t quite correct or necessary, some parts had been embellished, and important details had been omitted. He felt if he allowed this version to be printed it would later prove to be at variance with his own version. Recognizing that this might confuse readers as to which version is most reliable, he chose to compile it himself. However, by this time there remained just over three weeks in which to write the autobiography and it give it to Luang Por Tui for checking before the printer’s deadline. He was aided by notes he had made in the early years of his practice which could jog his memory and help him expand on details.

Due to his many commitments as abbot of Wat Boonyawad and the time constraint placed on him, he feels that his autobiography is only seventy percent complete. During the three to four weeks given to him, he had to work late into each night to come up with a draft. The first chapters of this book are detailed, the later ones less so owing to a lack of time, and the autobiography only goes as far as 2003. The final pages, in fact, were still being worked on until 1 a.m. on the night before it was to be given to Luang Por Tui. Fortunately Luang Por Tui expressed his praise on reading the draft copy, and did not have to make any changes.

Luang Por Akaradej has said that sometime in the future he might get around to writing a complete version of his autobiography by inserting missing details and incidents that he failed to include. For any reader wishing to know more about his life, you will find the audio version of his biography (recorded in Melbourne, 2007) to be of interest.

Today, his feelings about writing his autobiography remain the same as it did in 1980 when he first started recording some details of his life and practice: If it can be of benefit or provide inspiration to even only a few people, then writing it will have been worthwhile. Finally, I would like to acknowledge my debt of gratitude to all who have helped in bringing this book to fruition. For any errors that may still remain in either text or translation, the translator accepts full responsibility, and humbly begs both Ajahn Dtun’s and the reader’s forgiveness.